by Akhil Science
in Space
0 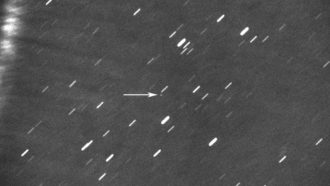 For the first time, an asteroid has been found orbiting closer to the sun than Venus — a neighborhood where asteroids are thought to be rare and tricky to find.

The space rock, designated 2020 AV2, orbits the sun once every 151 days along an elongated trajectory that keeps it between the orbits of Mercury and Venus. Such asteroids — known as Vatiras — were first predicted in 2012, but until now, no one had ever found one.

Asteroid 2020 AV2 was found January 4 by researchers at the Palomar Observatory in southern California. Following an alert by the International Astronomical Union’s Minor Planet Center, observers around the world confirmed and refined the asteroid’s orbit.

Asteroids that live inside Earth’s orbit are notoriously difficult to find because they spend most of their time close to the sun (SN: 4/3/15). Astronomers can therefore look for such objects only during brief periods of twilight.

According to computer simulations, Vatiras are rare, making up only 0.22 percent of so-called near-Earth objects. Vatiras probably start their lives in the main asteroid belt between Mars and Jupiter and end up between Mercury and Venus after a series of close encounters with rocky planets. Simulations suggest that Vatiras typically don’t remain in orbit around the sun for long — continued gravitational tugs from nearby worlds and uneven solar heating eventually send most crashing into a planet or grazing the sun.

Mount Vesuvius may have suffocated, not vaporized, some victims

Fed by human-caused erosion, many river deltas are growing